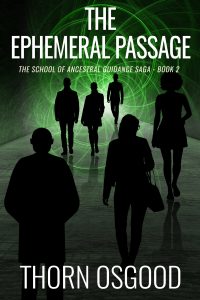 Convinced that Corilan’s Earth Renaissance Show message on Earth’s devastation and path to rejuvenated Earth is true, people pledged Earth care. They follow the organization’s members to the Ephemeral Passage. Now that everyone is here, allegiants and members don’t communicate. They all have questions about the passage, but her ancestral guide refuses to let her give a complete explanation.

Allegiant Jacob Somner, listens to other allegiants concerns that look to him for guidance and comfort. Not knowing what to expect, they are frightened and full of despair. He takes action on behalf of the allegiants and stirs dissension in the SAG board.

When Swain and the SAG board agree to make a decision they hope will close the groups breach, they soon discover it is not that simple.

Corilan seeks to convince her guide to reveal the passage secrets. As the tension grows, she and Jacob must find a way to connect and unify the groups so their future in Organic Earth is not lost forever.

Get the eBook at your favorite eStore

Also available at these eRetailers

Goodreads reviews for The Ephemeral Passage